Join me on my literary journey through New York. After an early stop in New Amsterdam, I've reached  the Gilded Age, when a woman runs for President, vice hunters battle smut dealers in the streets, and scandal engulfs the most famous man in America.  - Bill

Through the lives of these larger-than-life characters, the issues of the day play out – rigged elections, everyday shootings, attacks on the press, sexual impropriety, reproductive rights, the chasm between rich and poor – issues holding up a mirror to the country today.  Political parties split over a bitterly contested election, suffragist battles suffragist over bettering women’s place in society, pious saints fight soulless sinners, until at year-end this jumble of conflicts explodes in the greatest sensation of the nineteenth century.
"Solid Research and Outstanding Storytelling"
- Booklist (read full review)

Get A Dirty Year at:

Want to Support Your Local Bookstores?

Bill offers a variety of talks on New York's Gilded Age & its Dutch era, on Women's Suffrage circa 1870 & Victoria Woodhull's campaign for president, and on adventure travel.  Contact him at Bill at BillsBrownstone.com. 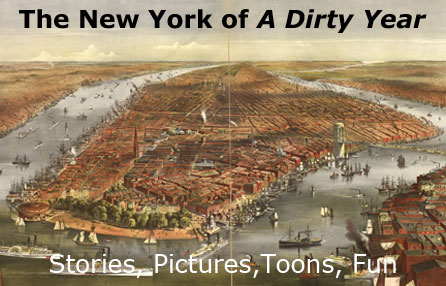 And join me farther back in New York's Dutch Era with my novel of New Amsterdam.  - Bill