The Naxi village where we stayed the prior evening had surprised us with an equally interesting experience around the dinner table.  The Naxi are the dominant minority on the eastern slope of Jade Dragon Snow Mountain.  Unlike the Yi, they cooperated as the Han Chinese moved into the area, being more interested in carving out a prosperous economic position than in proving their independence.  The Chinese repaid them with more fertile land at lower altitudes.

We reached Wenhai after a short drive and a three-hour walk from Lijiang.  Our first stop was the local store, which sported a new snooker table in its vestibule.  Ten men and six horses had hauled the massive slate piece up the mountain the prior week.  At two yuan a 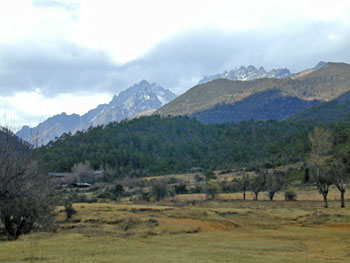 game, about a quarter, the store owner could likely pay off its 2,500 yuan price tag in a few months, maybe less if he added in the profit on beer that the players and spectators would consume.  We contributed for a couple of games and a few bottles.

The village operates a cooperative guest-house, purchased and donated by Jack Ives, a geographer who studied the area in the 1980s.  Several rooms line two sides of a courtyard.  A veranda runs around it, a kitchen sits in one corner.  We refreshed ourselves with tea and potatoes while awaiting dinner.  Various locals stopped by.  One old man told us of serving in the army of Lin Biao, a famous general who ran afoul of Mao and died mysteriously in a plane crash.  A young man training with The Nature Conservancy to be a guide offered to lead us to caves explored by Dr. Joseph Rock, the naturalist who first surveyed the flora and fauna of Yunnan in the 1930s.

Meanwhile, women were preparing the meal.  The Naxi kitchen differs from that of the Yi.  Rather than cooking over an open hearth, the women stoke a fire beneath a brick range, effectively a double burner with two massive woks set on top.  Dinner is served on a low table surrounded with benches, instead of the ground around the fire.  After laying out bowls of chicken, rice, and fried potatoes, the women retire, leaving the men to entertain their guests.

“I spent 30 years studying,” the doctor sitting beside Justin told us.  His mentor resided in Longpan, a few hours walk down the mountain.  “We melded our bodies together,” he continued, describing how he had learned to diagnose ailments.

He leaned over to take Justin’s left arm.  He placed the tips of his fingers on the inside of the wrist, measuring the pulse.  He moved his hand down to feel his patient’s palm.  He reached over for the right arm and repeated the process.

“Your back aches,” the doctor concluded.  Earlier in the afternoon, Justin had been squirming around on a bench, trying to get comfortable.  The walk uphill had indeed aggravated a minor affliction caused by too many sedentary hours hovering over a computer 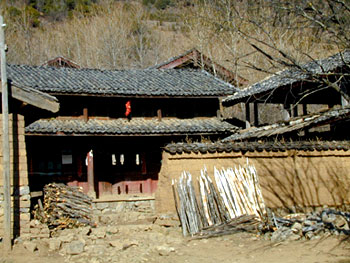 keyboard.  The doctor’s exhibition convinced Diane.  She held out her hand.

The doctor placed his fingers on her pulse.  “Your lungs hurt,” he diagnosed immediately, not needing to explore further along her arm.  Although she had shown no problems that day, asthma chronically clogged her breathing.  She held up an inhaler of medicine to demonstrate the accuracy of his assessment.

But the doctor was not done.  He continued on with his examination, feeling her palm and then her other forearm and hand.  He motioned to her stomach, indicating pain.  Cramps had plagued her for a couple of days.

Feeling healthy, I wasn’t sure that I wanted the doctor to uncover any lurking illnesses.  Nonetheless, he was batting a thousand and we wanted to see if he could maintain his average.  I rolled up my sleeves.  The doctor went through his normal routine.  He then stood up, raised my arm over my head and pulled it behind as far as possible.  “Bad back,” he asserted.

I questioned his finding.  Yes, I had been laid up years ago, but daily exercises had kept me pain-free for a decade.  Not to be outdone, the doctor countered, “The pain is rising.”  He placed his hand at waist-level, then rubbed up to my shoulders, demonstrating his message.  I shrugged off the diagnosis without much credence.

“Hao Chi,” we thanked our hosts the next morning for a hearty breakfast of eggs, pork and baba, the Naxi’s fried bread.  As we lifted our backpacks, my shoulders stiffened from the exertion of the prior day, the first time I had carried that weight in several months.  I would argue with the pulse doctor no more.