Su Sheng, the guide-in-training we had met in Wenhai, picked us up the next morning.  As his first job in his intended profession, he would be escorting us over the high route to Shanghai, another Naxi village where we would stay with his relatives and explore near-by caves.

After climbing a couple of ridges, the trail had led steadily downhill.  With each drop of a thousand feet, the land grew more prosperous. 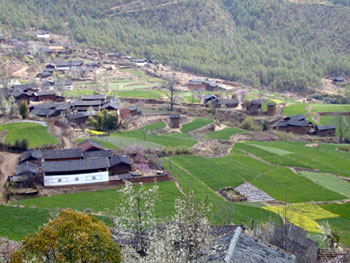 “Visit anytime.  I am always here by the fire,” the grandfather of the household welcomed us.  He had evidently earned a leisurely retirement.  He shared the compound with his wife, his daughter and son-in-law, and two granddaughters.

“Do you want to eat?” asked the younger man of the house.  We demurred except for food that required no cooking.  The family would be serving us dinner in just a few hours.

Our snack started with candied fruit, sliced thin.  We never determined its name, but in its natural form the fruit looked like a pale green and yellow gourd encased in a hard knobby shell.  Freshly picked, the inside was hard and sour.  Candied, it was sweet and crunchy.  Rice 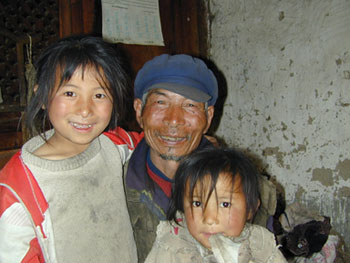 cakes accompanied it, the grain popped and molded with sugar into squares.  A stack of moon cakes was warmed over the fire, the only store-bought item we would consume in this household.  These large round cakes, almost a cross between a cookie and unleavened bread, had little flavor.

The son-in-law poured oil into an iron ladle and warmed it over the fire.  When he deemed it sufficiently heated, he mixed it into a porcelain bowl of chopped red peppers from one of the village gardens.  He piled a plate high with puffy rolls, freshly steamed despite our protestations against cooking.  Demonstrating, he tore a piece from the roll and dipped it into the red peppers.  We followed his example and were soon filling ourselves with bland dough covered in an addictive fiery sauce.

“We are hiking to the caves this afternoon,” Justin informed our hosts.  Local lore claimed that Joseph Rock had photographed a large crowd of Naxis on pilgrimage at the caves.  The rooms in the cliff face had been carved into pools for collecting water during the rainy season.  The water cascaded down tiered fountains at which the devout prayed for fertility.

“You will need refreshments,” the old man said.  We knew it was pointless to resist, despite the piles of fruit, cakes and rolls in which we had made only a small dent.  We each received an Asian pear, a large apple-shaped fruit with a reddish mottled skin and a watery flavor that mixed pear and apple, plus a couple of handfuls of walnuts.  Thus fortified, we headed for the caves, wondering what feast would await our return.

The caves were hardly breathtaking, but we were not to be disappointed on our arrival back at the village.  Dinner was once again served in the Naxi manner, the grandmother covering the table with what seemed like a dozen dishes before she retired.  “Everything is grown in 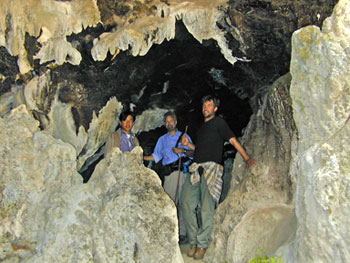 the village,” the son-in-law assured us.  The obligatory chicken had given its life to the stew pot, its head and feet naturally offered first to the honored guests.  Pork had been cut down from the rafters in the upstairs room where Justin would sleep, the meat boiled and served in its broth, the rind laid out in another bowl.  Scallions flavored thinly sliced fried potatoes.  One vegetable was simmered with spices, another swimming in soup.  Rice accompanied everything.

The men enjoyed watching us eat the bounty of their harvest in these well-watered lands lying far down the mountain.  Our dinner companions on this evening had not been the most talkative or opinionated we had encountered.  Baijo, the local liquor, did little to loosen their tongues as we drank around the fire, munching sunflower seeds for dessert.  But their hospitality and cuisine were clearly a source of pride on this last night before we walked out to the roadhead.  We could truly compliment our hosts,  “Hao Chi.”