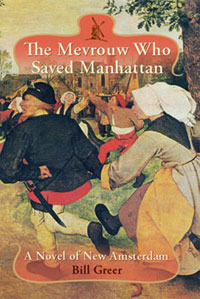 "People and action
right on the money."

"Hilarious. Jackie had me
laughing out loud."

"Gets better and better ... toward a highly satisfying resolution."

"Jackie is real, engaging
and believable."

"How lusty those Dutch are."

"Did they really drink that much?"

"Vivid descriptions all 'round."

"Bill Greer has deftly blended fact and fiction in his humorous tale The Mevrouw Who Saved Manhattan. ... The characters are rowdy, raunchy, loveable, and sometimes despicable, but thoroughly believable. ... This is a thoroughly delightful story that brings the Dutch colonies to life."

"A very authentic ring, like etchings by Van Ostade and Steen."
- Dr. Charles Wendell, President of the New Netherland institute

When Mevrouw Jackie Lambert opens her New Amsterdam tavern in 1626, she jumps aboard a madcap ride through New York history. With a razor-sharp tongue and the tastiest beer on either side of the Atlantic, Jackie spurs the tiny Manhattan settlement toward a head-on collision with the tyrannical Dutchmen who rule it. Poison, blackmail, murder, all are fair game as she fends off threats to the family she yearned for growing up as an orphan. And when pegleg Peter Stuyvesant would rather destroy the town than surrender his honor, Jackie must take history into her own hands or lose everything she has spent a lifetime building.

While a work of fiction, The Mevrouw Who Saved Manhattan paints a real portrait of life in New Amsterdam with all its humor, bawdiness, and conflict. It presents a window into Dutch culture during the Golden Age of the Netherlands and how that culture transplanted to the wilderness of the Hudson Valley. It shows Indian life as the Dutch saw it. Real people and real events fill its pages. The thread of Jackie's life reflects the central theme of the Dutch period, the rebellion of the common people against their rulers, the Dutch West India Company and its Directors, a conflict historians argue laid the foundation for the pluralistic, freedom-loving society that America became.

Buy the Book at
Amazon - Paperback or Kindle

To explore more of New York and the World, wander through the Brownstone with me.  - Bill 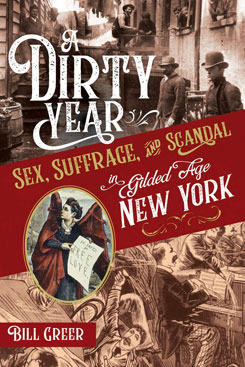 A nonfiction narrative of 1872 New York, a city convulsing with social upheaval and sexual revolution and beset with all the excitement and challenges a moment of transformation brings.
From Chicago Review Press, 2020