During my 1988  visit to Nepal, Upper Dolpa was severely restricted, if not fully closed, a mystical land known largely through Peter Matthiessen’s eyes in his book The Snow Leopard.  Though Dolpa's still off the beaten track, a three-week trek through it was the highlight of my 2015 visit.  The trek included 3 passes over 5000 meters, a few days along Phoksundo Lake, a couple more at Shey Gompa, and some ad hoc roaming north and west of Saldang when we had a few days to spare.  I hope this gallery of 72 photos will give you the flavor of the place – the mountains, the villages, the people, their culture.  For more, you might dig up the 1999 Oscar-nominated film Himalaya, shot around Lake Phoksundo and in the village of Saldang.  (It is also known as Caravan.) See a day-by-day itinerary & map below the gallery.

A special thanks to Amrit Ale for arranging the trek, Rishi for guiding us, and Dawa whose delicious food filled us with the energy to wander around at 17,000 feet.  Meet them at Amrit’s company, Himalayan Quests.

Day 24: Fly from Juphal to Kathmandu via Nepalgunj 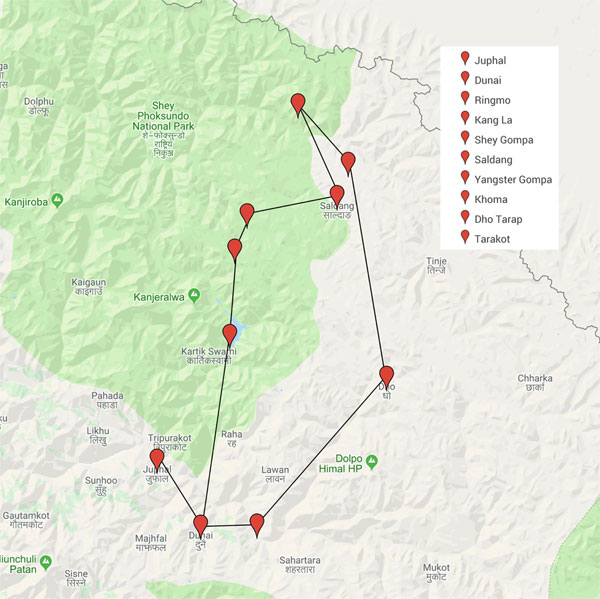