All the Old News & Views

Reading a lot of old books and newspapers, along with more modern histories of New York, I run across some amusing things - what's happening around town, stories the papers report, pictures of people and places, what visitors say about the city.    Old News & Views is a sampling of items that turned my head.

ALSO TRY THE OLD NEWS &  VIEWS
ON LIFE & ON WRITING

“I didn’t need any entertainment. . . . It was beautiful going to Washington Square or Tompkins Square Park and seeing people gathered to read poetry or sing or play chess. For me, New York meant freedom.”

A NEWCOMER'S PERSPECTIVE OF MANHATTAN

"I lost my fear of the city the day I flew over it . . .Two miles below you, Manhattan seemed but a lizard lazing in the sunlight of a September noon."

AN ENGLISH POET'S VIEW OF NY

"An architecture conceived in a child's dream ... glittering clamor of myriad windows set like colored diamonds."

- Mina Loy upon sailing into the harbor and seeing the skylilne, 1916

THE METROPOLITAN MUSEUM OF ART 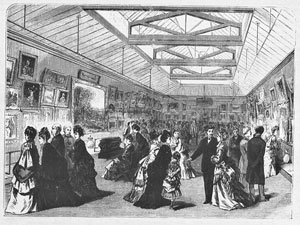 "At last we have something to represent to us what the Louvre is to Paris and the National Gallery to London," said the Herald after a private showing 3 days earlier.

A RUSSIAN'S VIEW OF NY

"More than any other city in the world, it is the fullest expression of our modern age … a city of prose and fantasy, of capitalist automatism, its streets a triumph of cubism, its moral philosophy that of the dollar."

Impressive Exercises at St. Paul’s and the Sub-Treasury – The Monster Parade from the Battery to the Park – Fifty Thousand Men in Line and a Million Looking On

The occasion was the centennial of George Washington’s inauguration. Pictured below is the Reverend Dr. R. S. Strong offering a prayer on the site of the Old City Hall where Washington took the oath. 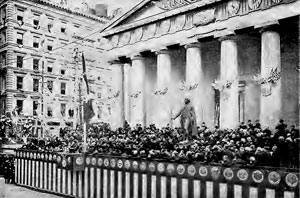 HANGING OUT IN TIMES SQUARE

"The most fascinating, the most comic, the most tragic living, breathing movie in the world."

"Mrs. Margaret Sanger, founder of the Birth Control League, has been awarded the annual medal of the American Woman's Association ... for the qualities of 'vision, integrity and valor' ... Such is the common sense of what she has been saying ... that people have at last begun to listen and believe.  Her victory is not by any means complete, but the dragons are on the run."

Evidence showing that a woman did not cause the downfall of the human race was produced by Dr. Stephepn Langdon.  His translation of Babylonian tablets from the ruins of Nippur indicates Noah ate the apple, perhaps fed by a feminine deity who saved him from the deluge.

Built in 1917, this wooden battleship in Union Square served as a recruiting station in WWI.

Henry Bergh, founder of the Society for the Prevention of Cruelty to Animals, considered the sport of pigeon shooting “cruel and unmanly” and “a bad omen for our civilization.” On this day, “the dreaded name of Bergh threw a damper over the spirts” of the Jerome Shooting Club, who had gathered 200 strong to watch eleven of their number vie for a silver cup.  Fortunately the gentlemen with the guns capitulated with loud swearing rather than noisy blasts.

"I then could hear it two thousand miles away, or so it seemed.  The distant chant seemed both repellent and alluring, a siren's chorus that even now I seem to hear.  I listen to it once again across the many miles and the many years, not with the pathos of yearning for gone days but  with the gladness of having known the springtime."

- Journalist Gene Fowler, after moving back to Denver, c. 1915

ALSO TRY THE OLD NEWS & VIEWS
ON LIFE & ON WRITING