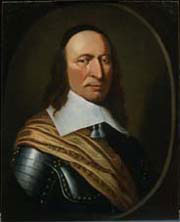 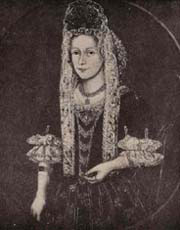 "He scowled down his long nose, his beady blue eyes sizing up the saucy tart before him. I was a comely lass, though not likely to his taste, being small of frame with my paps barely budding and my bottom fitting through the door a couple of times over and my hair darkened by the Frenchified blood my moeder gave me, sort of like chestnuts burned in the coals. A Frisian girl would fill a barrel with her buttocks, and she coudn't wash her bosoms without overflowing the tub."

-- Jackie Lambert meeting a young Peter Stuyvesant fresh off the boat from Friesland in The Mevrouw Who Saved Manhattan.

Peter Stuyvesant, the stiffest of men, was outraged by immoral behavior. He must have nearly burst in anger when "Broad Advice" was published in 1649. Purporting to offer advice to the West India Company, this pamphlet really delivered a libelous screed against Stuyvesant and his predecessor Director Kieft.

The writer presumably was a sworn enemy named Adriaen van der Donck, who had led a delegation to Amsterdam to demand Stuyvesant's recall. He knew how to hit Myn Heer General where it hurt. As a young man, Stuyvesant had attended the University of Franeker in Holland. Though he failed to graduate, thereafter he signed his name not Peter but Petrus, the Latin variation because an educated man should have a Latin name.

Why did Stuyvesant fail to graduate? Broad Advice delivered the answer. The son of a Dutch Reformed minister "robbed the daughter of his host," or in more modern language, he couldn't keep his hands off his landlord's daughter or his prick in his pants. The university booted him out for seducing the young virgin.

Arguably the next charge enraged Stuyvesant even more, questioning as it did his service to the Company. Before coming to New Amsterdam, he commanded the Company's holdings in the Caribbean. With the Netherlands locked in a bitter war with Spain, he attacked the Spanish stronghold at St. Martin. A cannon ball tore his right leg off, forcing the Dutch to retreat.

Why had the Dutch lost the battle? Broad Advice delivered an answer for that question too. The puffed-up peacock Stuyvesant burned all the powder firing salutes to himself on the voyage to St. Martin. None was left to fight the Spaniards. Indeed when the very first ball from the enemy's cannon shattered his leg, Stuyvesant retreated so fast that the Dutch left everything behind, even their field pieces. After such an heroic action, Broad Advice wondered, was it any surprise the Company appointed him to Director in New Amsterdam?

A lost leg would kill a man of lesser steel. But Stuyvesant returned to the Holland home of his sister Anna to recuperate. Judith Bayard, the sister of Anna's husband, nursed him back to health. At thirty-seven, the nurse was a spinster long past marrying age. Three years younger and no spring chicken himself, Stuyvesant took a shine to Judith.

Stuyvesant told her brother that he intended to ask Judith for her hand. The brother scoffed. "You will never get the nerve," he claimed, and he would put his money on it. He proposed a bet of a considerable quantity of French wine.

Stuyvesant's friend John Farret agreed. The two men were so close they wrote poems to one another. Upon hearing of Stuyvesant's wound, Farret had penned:

My Stuyvesant, who falls and tumbles on his bulwark,

Where, like a dutiful soldier, he taunted the enemy,

To lure him into the field, on the Island of St. Marten.

The bullet hits his leg; the rebound touches my heart.

Upon hearing of his friend's betrothal, Farret chose a different theme for the poem he sent. Priapus has died in you, my friend, he wrote, referring to a Greek fertility God. If wed, you will never consummate the relationship. Stuyvesant was furious. He charged his friend with trying to make him lose the bet of wine.

But Stuyvesant and his bride married before setting sail for New Amsterdam, probably toasting their nuptials with the wine he won. Farret had to eat his words. When the couple stepped onto the Manhattan shore, Stuyvesant was sporting a new wooden leg and Judith was four months pregnant with their first of two sons.

For more of the bawdy world of Dutch Manhattan, check out Sex and the City: The Early Years.