You look at the profile of the land to see it as it was when man first climbed up. Coming out of the New Mexican desert, it looks like the first rolling slopes that lead into the Colorado mountains. As you ascend, you realize you are climbing the side of a flat-topped ridge lifted out of the flatlands, not starting the rounded foothills that will give way to the peaks. At the top, you stand at the base of a triangle formed by the mesa, with Stollmeister Creek and the Piedras River running a thousand feet below on the east and the west. The triangle narrows as you move along the gradual slope. The terraces tumbling down to the streams steepen into rocky cliffs. At the apex, you stand on a narrow ledge, able to peer down both sides. Your eyes are drawn ahead to another smaller triangle of land spreading out before you, then to the two eroded spires rising beyond which give the Chimney Rock Archaeological Area its name. 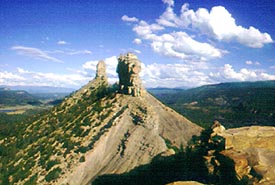 The land mass camouflages the community of several hundred souls that settled it around the 10th century. They occupied the fringes of Anasazi society, driven from the downstream valleys as the environment deteriorated and the land could no longer support their numbers. This new home with its shortened growing season barely accommodated their agriculture, and it isolated them as their brethren to the south and west advanced their civilizations. But it offered a rich flora and fauna, allowing them to revert to the outmoded hunter and gatherer ways to supplement their subsistence.

You see the ghosts amidst the rubble of a dozen abandoned villages. A cluster of round pithouses form a village, each barely sunk before the diggers hit bedrock and ringed it with thick stone walls. The living space is outfitted with the essentials of home: a hearth, a ventilator shaft, post holes for supporting the roof beams, storage bins, rectangular rooms adjoining at ground level. You visit with the families carrying out the daily routine. The men descend in the morning to the fields carved along the riverbanks and spend the day tending the corn and beans. The women follow, collecting plants on the way down, straining as they haul water back up. You hear women gossip as they grind corn in a communal milling area or fire pottery. Stone axes ring as the men quarry sandstone or fell timber for their building. On occasion, the communities congregate in a larger round structure to discuss secular problems or perform religious ritual.

As the 11th century neared its close, strangers began to encroach, coming north from the cities of Chaco. The Chacoans had engineered a wide network of roadways and outlier communities extending from the center of their civilization in a New Mexico canyon. They were pushing beyond its limits to impose their will on Chimney Rock. Were they seeking timber for the Great Houses they were building in their homeland? Or converts to a primitive religion? Or simply to conquer more peoples and satisfy a hunger for power? 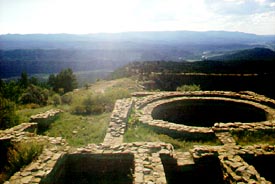 As you cross the ledge leading to the upper triangle, the invaders' domination manifests itself. The foundations of a Great House cover the spit of land. A retaining wall holds landfill out of which a great Kiva has been dug. Climbing the wall, you look into the round pit and explore the dozens of rooms that surround an even larger Kiva. Transported back in time, you watch an army of laborers carry stone, timber and water to the building site. Skilled masons carve the sandstone that bricks the facades. Their apprentices climb the scaffolding to the upper stories and dump rubble into the walls' interiors. Architects true the rounding of the Kivas. The overseer urges the work on, planning his report to the Chacoan elite who hold the military or religious magic that binds the pieces together.

Still, the motivations remain hidden. The Chacoans seemed to be designing something different here. Other Great Houses spreading into southern Colorado were laid at regular intervals along the highways. Dense settlements surrounded them. But at Chimney Rock, the complex was situated on a high promontory, away from the villages. No roads ran near. No other houses were placed at the standard distances. Even the design was altered, as the shallow bedrock prevented the Kivas from being burrowed into the earth.

A snowy night late in the 11th century unveils the secret. The elite gather on the Kiva walls staring at the twin silhouettes of the pinnacles overlooking the Great House. A guard mans his post on the ledge, holding back the masses enthralled by the ritual occurring above. The shamans intone sacred chants prepared for this culmination of years of observing heavenly bodies and changing seasons. Slowly, a glow rises between the two chimneys and the bright orb of the full moon at winter solstice slides up the gap. The crowd below gapes in wonder, and the leaders marvel at the mystery of the twin gods. The shamans know that the miraculous event will not be repeated for eighteen years when the solstice moonrise again reaches its northern most point.

Chimney Rock, as of 2012 a National Monument, is located about 50 miles from Durango and 25 miles from Pagosa Springs, Colorado, along Highway 151. For visitor information, visit the Chimney Rock Interpretive Association.