"A gang attacked him with axes.  He had to defend himself.”  Our host explained the situation of a young man accused of murder.

On our second day, we walked for a half-hour after lunch with the shaman to the third complex of houses in Xuehua.  We stopped at the home of a young couple whom Justin knew through his work with Photovoice, a Ford Foundation

project distributing point-and-click cameras among villagers to record their life and environment.  A just-completed building enclosing one side of their courtyard would provide rooms for the night.

Our protests against killing the third chicken in 24 hours convinced the wife.  She instead cooked a typical though elaborate Yi meal – boiled pork, soup with vegetables, rice and potatoes.  She served it around the fire in what she proudly described as “the Yi way.”  As she cleared the dishes to our offers of Hao Chi, three of her husband’s friends arrived for an evening of discourse with the foreigners who so rarely visited.

Our host continued his story.  Evidently the teen and his friends had wandered down to Longpan.  For reasons that seemed no more serious than town rivalries, they had gotten into a fight with a group of local boys.  Unfortunately that gang was armed sufficiently to cause serious harm.  In the melee, the Xuehua youth had gotten his hands on one of the weapons and used it lethally.

“He sits in jail now while the families negotiate a settlement.”  A settlement?  That solution did not fit our western notion of justice, where a victim’s relatives would more likely be calling for vengeance.  But it reflected the local reality.

The dead youth’s family had suffered a serious blow, partly the emotional trauma of losing a son but also the cost of a worker who would help support the family.  His relatives expected compensation.  But they expressed no desire to extend their pain.  The loss of the accused would impose an equally serious hardship on his family.  Better to arrange a settlement that could provide tens of thousands of yuan, thousands of dollars, to ease the sorrow.  The teen could be released and both families could put the matter behind them.  The debt would be punishment enough, representing years of income and no doubt requiring contributions from many distant relatives.

The moral of the story is more about economic realities than crime and punishment.  Both Xuehua and the Naxi village of Wenhai sit at altitudes above 10,000 feet.  The hillsides are steep, the soil marginal and the growing season short.  Potatoes are the most reliable crop.  They can be eaten locally, though they have no value in the marketplace.  Food actually flows uphill, the valleys sending produce to these agricultural highlands.  The locals make charcoal or cut timber to earn enough cash to survive.

Visitors over the decades recorded a photographic legacy testifying to the vagaries of agriculture on the slopes beneath Jade Dragon Snow Mountain.  The naturalist Rock photographed a forested terrain two decades before Liberation.  During the Great Leap Forward of the 1950s, the government collectivized the land, cleared it and began a crop rotation program.  The farmers planted one crop the first year, 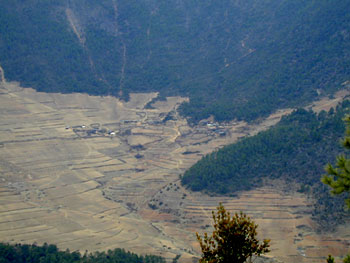 another the second, and then let a field lie fallow the third.  By the 1980s, privatization had begun and the land was divided into family plots.  With the villagers directly profiting from the produce, they sharply intensified the farming on the land, unfortunately to the point that fields became depleted and abandoned.  The geographer Ives, shooting the same hillside as Rock, captured the result – erosion.

A few years ago, the government implemented another program, “Farmland to Forest.”  Villagers are given five years of food compensation to remove fields on 25 degree or greater slopes from production and to replant the forest.  In this area, “forest” typically means thorn bushes whose berries are used to produce oil.  As part of his research, Justin photographs these fields, replicating scenes captured in earlier years by Rock and Ives.

“We got only half our food allotment last year for the land we converted,” our host explained.  He did not elaborate on the reasons for the shortfall in compensation, though earlier he had cited corruption as the largest problem the people faced.  “We worry that officials will penalize us again this year for the logging.  It will cause trouble in the village.”

The government banned logging about the time it started the Farmland to Forest program.  But with timber from national and provincial lands curtailed, the wood bosses are coming to buy logs illegally harvested from collective forests owned by the villages.  We would see the effects the next day when we walked through a hillside clear-cut except for rhododendron bushes scattered about the slope. The few locals who don’t resist can earn good money chopping down the trees.  But the entire community suffers from the punishment imposed by administrative officials, creating the strife to which our host referred.

Local concerns did not completely preoccupy the villagers, however.  The men held conflicting views of America.  “A bully pushing everyone else around to get its way,” our host initially described the U.S.  The past year’s diplomatic flap over the grounding of an American air force jet by Chinese pilots likely influenced his perception.  This attitude did not prevent a show of empathy with the terror of September and a great deal of interest in the aftermath and recovery when they learned we lived only a few kilometers from the World Trade Center.

But it was economics, not politics, which drove the men’s larger world view.  “Paradise,” our host shifted ground.  “We all want to go to America.”  We tried hard to convince him that material riches did not make our country a perfect place.  Little time with your family, a squabbling government, and other trials of modern life all fell on deaf ears.  He repeated his definitive belief, “To us, America is paradise.”

We no doubt reinforced his view when the few dollars we gave him for our beds and meals amounted to more cash than he would typically see in a month.