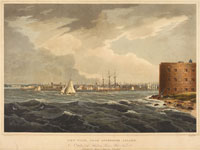 1820: William Guy Wall painted this watercolor from scenes he sketched traveling down the Hudson River in 1820. John Hill engraved it for printing in the 1820s. [Eno Collection of the [New York Public Library]

1824: President Monroe invited the Frenchman Gilbert du Motier, Marquis de Lafayette and hero of the American Revolution, to return to the United States to celebrate the nation’s upcoming fiftieth anniversary. This print by artist Anthony Imbert and engraver Samuel Maverick celebrates his landing in NewYork in August. The city partied for four days and nights. [Eno Collection of the New York Public Library] 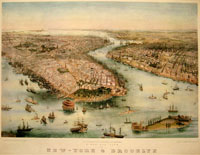 1851: John Bachman produced a number of Manhattan views, including this hand-colored lithograph, “Birds Eye View of New-York & Brooklyn,” and the 1855 and 1859 images below. In this one, note that from the green park at the tip of Manhattan, a bridge leads to Castle Garden, the circular building. Compare that to the next image four years later. [New York Metropolitan Museum of Art] 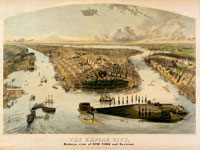 1855: In Bachman’s “The Empire City, Birdseye View of NEW-YORK and Environs, the shoreline of the Park extends to hit Castle Garden, with only half of the circular building extending into the water. This presumably reflects one of the many times Manhattan’s shoreline has been extended with landfill. Today Castle Garden sits in the middle of Battery Park, far from the shoreline. [New York Metropolitan Museum of Art] 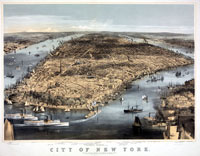 1856: Charles Parsons produced this perspective similar to Bachman’s 1855, a perspective popular for the next three decades. [Library of Congress.} 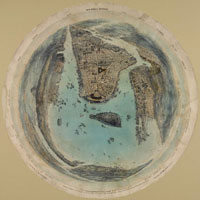 1859: Bachman embraced a very different perspective in this view from far above the earth. [New York Public Library]