1916: This photo shows the New York Dock Company along Brooklyn’s waterfront in the foreground.  The Manhattan skyline rises in the background, showing off the world’s tallest building.  The Woolworth building was completed three years earlier and enjoyed the tallest title until 1930.  At this date, the harbor still holds a good number of sailing ships.

1922:  This skyline view names the leading buildings below Chambers Street, which dead-ends into the northern most, the Municipal Building.  The Woolworth Building still reigns as the world’s tallest. But the Equitable Building completed in 1915 ranks as the world’s largest by floor area for one occupying less than an acre of land. 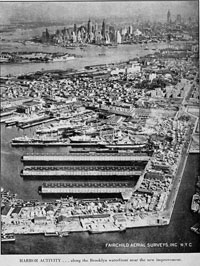 1941:  Another view stretching from the Brooklyn waterfront to Manhattan.  Sailing ships are things of the past.  Indeed ship traffic in the rivers and harbor appears to have shrunk from days gone by. [Fairchild Aerial Surveys, Inc. NYC]

1947: The skyline has leaped upward.  The Woolworth Building is now lost in the crowd. [US National Archives and Records Administration] 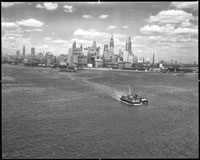 1951:  Lower Manhattan still has the magnificent skyline, but from this angle, the lone giant in midtown, the Empire State Building, looms to the left. [New York State Archives]

2012: The 21st century opens to an almost empty harbor, a rising One World Trade Center to replace the lost towers, and a space ship, the Shuttle Enterprise, heading for a permanent home along the Hudson. [National Aeronautics and Space Administration] 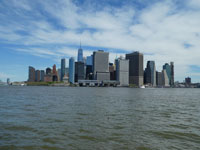 2019: Today's view from Governor's Island, with the spire on One World Trade Center reaching 1776 feet.

BACK TO: INTRODUCTION AND 17TH CENTURY